Architectural acoustics is one of the oldest sciences - Roman architect Vitruvius wrote about the acoustical properties of theatres in about 20 BC. Subsequently the physical understanding of sound and vibration developed through the work of scientists such as Galileo, Newton and later, Helmholtz and Rayleigh. However, it wasn't until the 20th century that technological advancements allowed scientists to begin to understand why halls sound the way they do. This started with Sabine around 1900 and the measurement of reverberation time.

It was known by the 1950s, however, that reverberation time alone was not sufficient in describing entirely how a room sounds. Erwin Meyer, after being appointed to the University of Göttingen in Germany in the late 1940s, initiated a substantial amount of room acoustics research in an attempt to discover other aspects governing the perception of sound in rooms.

Thiele, one of Meyer’s researchers, investigated the directional distribution and time sequence of reflections in the early 1950s [1,2]. His apparatus for measuring the directional distribution of reflections consisted of a parabolic microphone placed at many different angles while the room was excited with a steady-state warble tone. The output levels and directions were combined into the single quantity “directional diffusivity”, and it was believed that a higher diffusivity was more desirable, creating the feeling of being immersed in sound. The data was also visualised by an "igel" or "hedgehog" - rods inserted into a hemispherical base. The length of each rod represents the level of incident sound energy in a certain direction. A photograph of an igel is shown below. 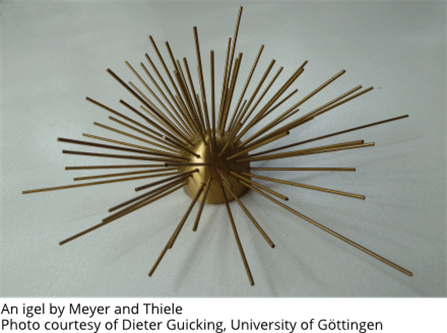 Thiele also measured the time sequence of reflections using an impulsive source and an omnidirectional microphone – an impulse response. From this he observed that early reflections are related to the “definition” or clarity of sound in room. 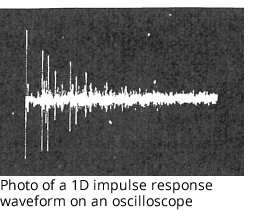 Junius, another student of Meyer's, published a study in 1959 [3] which improved upon Thiele’s directional measurement system by using an impulsive source - the magnitude and directions of reflections could now be analysed as a function of time. This was perhaps the first directional impulse response measurement system. He visualised these measurements in a similar way to Thiele (see below). 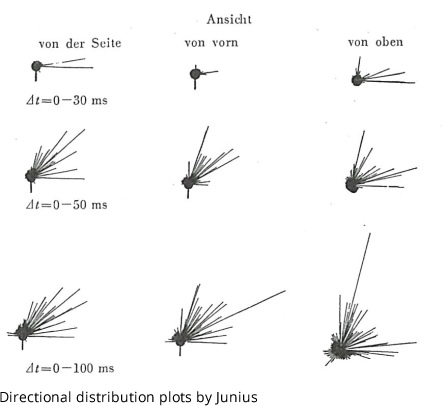 In the late 1960s, Harold Marshall discovered that early reflections arriving from lateral directions created a sense of space [4]. While he was reviewing various designs of the Christchurch Town Hall in New Zealand, he found nothing in the literature which rationally discussed the effect of room shape on acoustical quality, despite there being a preference for the classical rectangular hall. Listening experiences lead him to discover that early lateral reflections, typically associated with narrow rectangular halls, created a desirable sensation of spaciousness. This phenomenon, which he called spatial responsiveness (and later, spatial impression), was extensively investigated by Michael Barron, and Barron and Marshall devised the associated measure “early lateral energy fraction” [5]. This can be measured using an omnidirectional and figure-of-8 microphone. 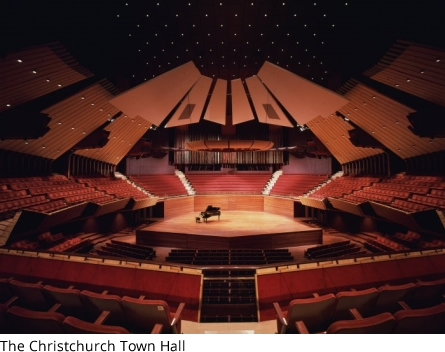 Today spatial impression refers to two subjective effects: the apparent source width, and listener envelopment. The former corresponds to Marshall’s and Barron’s work, while listener envelopment is related to the level of the late lateral sound energy, as discovered by Bradley and Soulodre in the 1990s [6].

The feeling of being immersed in sound and hence the direction of reflections is an important quality of room acoustics. Modern digital electronics and transducers have greatly simplified the process of conducting measurements that can obtain this directional information, especially compared to Thiele's original system. These measurement systems typically capture the 3D impulse response: sound arrivals in terms of strength, time and direction for a specific source and receiver. This fully objective description of sound forms the basis of modern research into why halls sound the way they do.

3D impulse response measurement systems using compact microphone arrays have been in development since the late 1980s, for example Yamasaki and Itow [7], Abdou and Guy [8], Farina and Tronchin [9], Merimaa et al. [10] and Fukushima et al. [11]. The most recent and perhaps most significant contributors to the field of room acoustics measurement and analysis in 3D are Alban Bassuet of Arup Acoustics in New York [12], and Tapio Lokki and his research group from Aalto University in Finland [13].